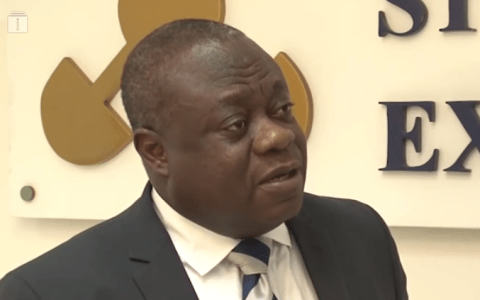 Homepage » Leaders » Ekow Afedzie appointed acting MD of Ghana Stock Exchange
The current Deputy Managing Director of the Ghana Stock Exchange (GSE), Ekow Afedzie, has been appointed to act as the Managing Director effective August 1.
Kofi Yamoah, current Managing Director is expected to retire at the end of October 2019 but will commence his terminal leave from August 1.
Mr. Afedzie has worked at the local bourse since it was established in 1990.
He has previously served as the Head of Marketing, Research and Systems, and as General Manager. He was appointed Deputy Managing Director in 2009.
Mr. Afedzi holds a Master’s Degree in Business Administration and a Master of Arts Degree in Economic Policy Management, both from the University of Ghana. He also holds a Bachelor’s degree in Law from Mountcrest University College.
The outgoing MD has served the Exchange in various capacities, including as Presiding Officer on the Trading Floor; Financial Controller; Senior Manager, Operations, and as General Manager.
He was appointed as Managing Director of the Exchange in April 2003. The Exchange has, during Mr. Yamoah’s 16-year tenure as Managing Director, undergone significant innovation, notably, the automation of trading, and the establishment of the Ghana Alternative Market (GAX) and the Ghana Fixed Income Market (GFIM).
The Council lauded the outgoing MD whom they said has been instrumental in the development of the capital market in Ghana.
Citibusiness news