The Deputy Chief Executive Officer of the Ghana Tourist Development Company, (GTDC), Akua Djanie, has resigned from her post, after serving in office for about 16 months under the Akufo-Addo administration.

Miss Djanie was appointed when the New Patriotic Party (NPP) government took over power in 2016.

She announced her resignation on Facebook, saying “ Has she, has she not? Yes, people, I have officially resigned as Deputy CEO, Ghana Tourist Development Company, effective end of this month.’

A seemingly frustrated Ms. Djanie added that she just “wanted to work, not travel and chop per diem” while serving in her role.

She, however, extended her gratitude to the President, saying “I would like to thank H.E President Akufo-Addo for the opportunity he gave me. Unfortunately, the rest of the team did not. Thus I’m better off outside of the official post.’’

In an interview,  Miss Djanie, who goes by Akua Blakofe on Facebook, said she resigned because she felt her skills were not well utilized.

“I don’t do anything all day. My CEO doesn’t want me in the team so he has created a three-man team he works with. Meanwhile, I don’t see what GTDC is doing. The CEO travels every month for two weeks straight. In April, he was gone for three weeks,” she stated.

Blakofe, until her appointment at the Ghana Tourist Development Company, had been a radio and television personality.

With 23 years experience in broadcasting and show business, Blakofe has worked with Metro TV, Vibe FM, M-Net’s Studio 53, and has hosted top events in the country.

She was the first manager of the VIP music group when it was formed in 1998. 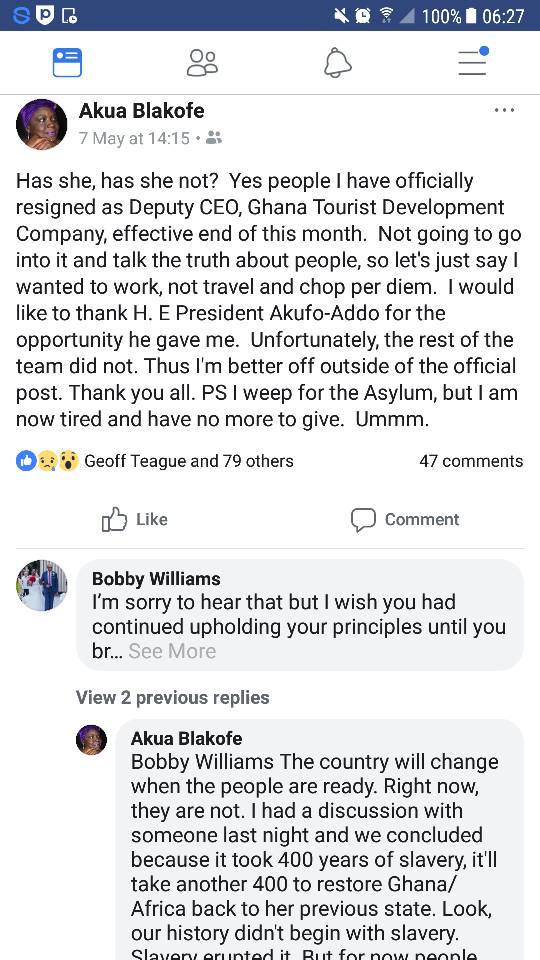