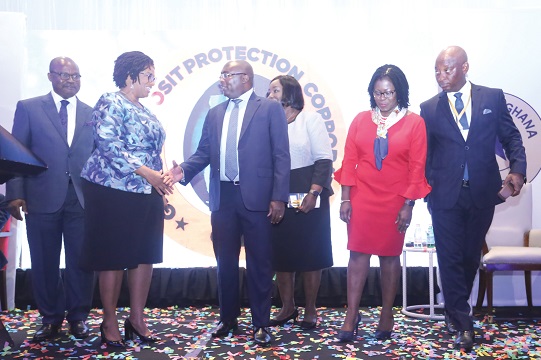 The government and the Bank of Ghana (BoG) have each contributed €13 million as seed money for the smooth take-off of the Ghana Deposit Protection Corporation (GDPC).

This is in addition to the GH¢400,000 paid by the banks to boost the GDPC’s reserves to enable it to provide cushion for depositors in case of a bank’s failure.

It was on the theme: “Deposit protection – A catalyst for financial stability”, and participants came from around the world.

Dr Bawumia said the establishment of the GDPC was in the right direction and that it would add up to Ghana’s financial safety net apparatus, boost depositors’ confidence and also ensure a safe and sound financial system.

The new deposit insurance scheme, in addition to the prudential regulation by the BoG, was also expected to ensure stability in the financial sector, he averred.

He said deposit insurance also prevented bank runs and ensured the stability and smooth operation of the economy.

“It is an important step to boosting the confidence of the Ghanaian depositor.

And it is part of efforts to lock-in the gains of financial sector reforms carried out over the last two years,” the Vice-President added.
Public sector purse

He recounted the cost of the recent financial sector clean up and said it was a strain on the public sector purse.

He said the financial sector was plagued by a number of challenges, including poor corporate governance, poor risk management practices, related party transactions that were not above board, regulatory non-compliance and poor supervision by the central bank.

These, he said, led to the build-up of vulnerabilities in the sector which triggered the BoG to embark on the costly reforms of the industry.

The Governor of the BoG, Dr Ernest Addison, said the establishment of deposit insurance put the nation in a state of readiness to better manage the failure of banks and deposit-taking financial institutions in the future.

He said the absence of such a scheme in the midst of bank failures could impose an enormous strain on fiscal policy management.

According to Dr Addison, the government was being compelled to finance pay-outs to depositors in an attempt to forestall a potential for a bank-run and also help contain threats to financial stability.

“To curtail the potential adverse effects of bank failures on state resources and enhance public confidence in the financial system, the establishment of deposit protection schemes has become the norm,” he added.

The GDPC will reimburse depositors six days after a bank failure and a resolution for notification by the BoG.

Ghana is the 145th country in the world and 29th in Africa to adopt a deposit insurance scheme.

The President of the Ghana Association of Bankers, Mr Alhassan Andani, said the establishment of the scheme was encouraging, adding that it would help boost public confidence in the banking system.