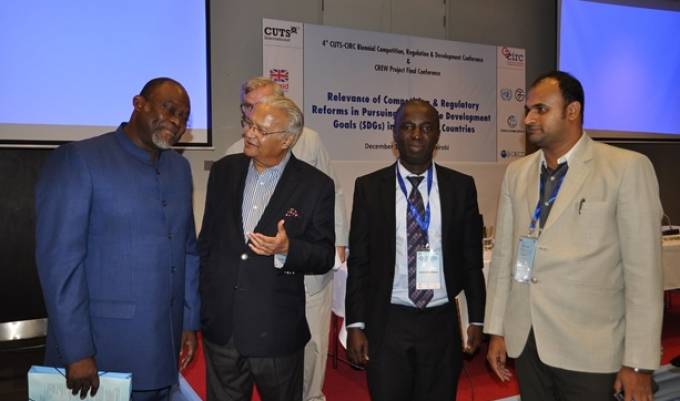 Although businesses are also beneficiaries of well-functioning competition regimes, they often resist them as advocates fail to properly demonstrate the relevance of competition policy to business.

Minister of Trade and Industry Mr. Ekwow Spio-Garbrah said this at a conference organised by CUTS International at Eka Hotel in Nairobi on the 13th December 2015.

The minister indicated that business is likely to support any policy reform that can be seen to have a positive impact on profit, which is the main motive for business.

In addition, business is interested in the availability of goods and services, as well as extent to which the general operating environment is good for business.

It is therefore important for competition policy to be seen playing a complementary role in this regard. Thus competition policy advocates need to ensure that it is seen to be contributing to businesses’ interests to gain their buy-in.

The minister also indicated that competition reforms also mean different things to different people, which is why some stakeholders might fail to support them.

For example, in Ghana there is a feeling among some stakeholders that some sectors have more players than necessary, but the benefits expected from such intense competition are not being realised.

There are about 30 banks in Ghana, even though interest rates are so high — ranging between 30% and 40%.

Thus, trying to sell benefits of competition as low prices might be seen as not correct under this context, as such benefits are not being realised in Ghana. This might be a source of apprehension about benefits to competition.

This argument has been encountered regularly among stakeholders during CUTS International’s implementation of several projects in various countries, as this underplays the role played by anticompetitive practices in negating the benefits of competition.

For example, banks in Ghana might be colluding on interest rates, which could have been easily dealt with by a competition law.

This demonstrates the need for more awareness about what competition is within the context of competition policy, and how the benefits are expected to materialise.

The minister however indicated that while there are also some career politicians who might have limited understanding of competition policy, there are policymakers who fully understand about the need for competition reforms as this is critical for both consumer and producer welfare.

Thus, competition advocates should continue to work with such policymakers to ensure competition benefits are enjoyed in the economy.

The two-day conference, which was a combination of CUTS flagship Biennial Competition, Regulation & Development Conference as well as a final conference of the project entitled ‘Competition Reforms in Key Markets for Enhancing Social & Economic Welfare in Developing Countries’ (referred in short as the CREW Project) ended on the 13th of December 2015. The CREW project is being implemented by CUTS since November 2012 in four countries — Ghana, India, The Philippines and Zambia — with support from DfID (UK) and BMZ (Germany) facilitated by GIZ (Germany).

The conference’s main theme was ascertaining the relevance of competition and regulatory reforms in pursuing the recently-launched Sustainable Development Goals (SDGs).

Some of the key messages from the conference include the fact that there is still need to advocate for competition reforms, given that there are still some countries which are yet to adopt them.

However, it is critical to take cognisance of the political economy issues when developing competition regimes, so that they remain relevant to the broad national objectives.

The importance of competition reforms in regional integration and trade was also emphasised, given that anticompetitive practices perpetrated by players from other countries can also affect consumers and producers of a country that is yet to adopt competition laws.

Governments should continue to pursue other development-oriented reforms, which competition reforms can only complement for the attainment of SDGs.