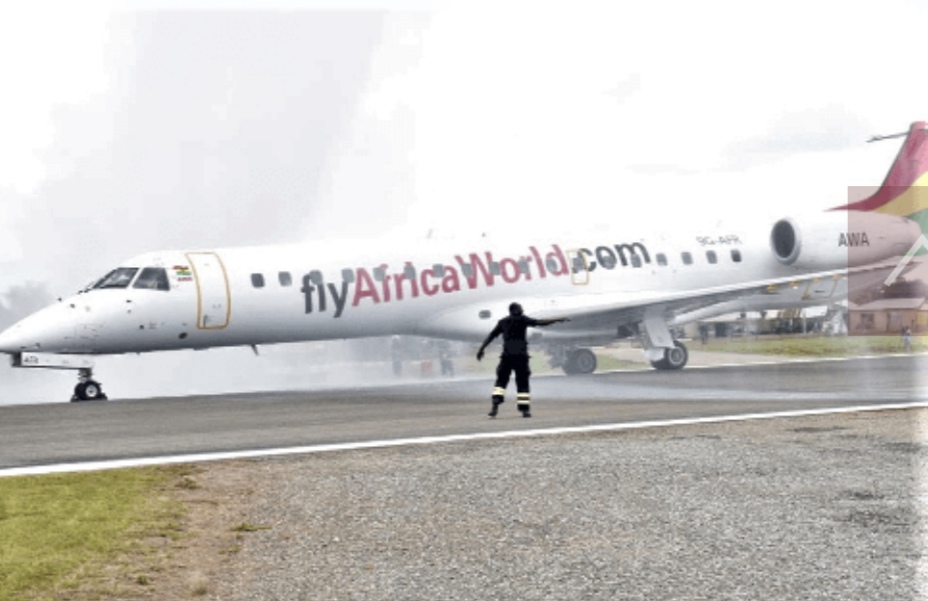 Commercial flights to Wa are expected to enhance connectivity between the southern sector and the Upper West and East regions, and between Ghana and other West African countries to enhance business transactions.

Wa is a very fast-growing town with large tracts of land which are open for economic development. It takes about 10 to 12 hours by road from Accra, the national capital, to Wa.

However, it takes just about 45 minutes to fly from Accra to Wa.

The euphoria was high in Wa as the AWA flight touched down at exactly 12.25 p.m. to mark the commencement of the three-times-a-week schedule to be operated on Tuesday, Thursday and Sunday mornings from Accra, with a stop in Tamale.

Residents, including chiefs, civil and public servants and representatives of the major political parties gathered at the Wa Airport to welcome the historic flight to the Upper West Regional capital.

Some students of the St Francis Xavier Senior High School were conveyed to the airport to also welcome the commercial flight, which was piloted by a former student of the school and native of the Upper West Region, Captain Victor Pul.

The Deputy Minister of Aviation, Mr Yaw Afful, who inaugurated commercial flight operations to the airport, expressed satisfaction at the various facilities provided at the airport.

“A commercial flight in the region will facilitate the movement of goods and people, not only for the improvement in the standard of living but also encourage workers, academics and businessmen to accept posting to and do business in the region,” he said.

He said the opening of the facility was in line with the government’s determination to make the country the aviation hub of sub-Saharan Africa, adding that those were the growth poles that must be put in place to boost economic activities.

“You can go and transact business in Accra, Tamale, Kumasi, Sunyani or even Takoradi and come back, but the situation where you spend the whole day on the road is not good enough,” Mr Afful said.

He commended AWA for blazing the trail in the quest to open up the country for fast, efficient and easy business transactions.

The Upper West Regional Minister, Dr Hafiz Bin Salih, commended the government’s determination to link Wa by air to the rest of the country and said with the commencement of commercial flights to Wa, citizens from the northern sector and the sub-region would have easy access to the coast and flights to even outside the country for their duties.