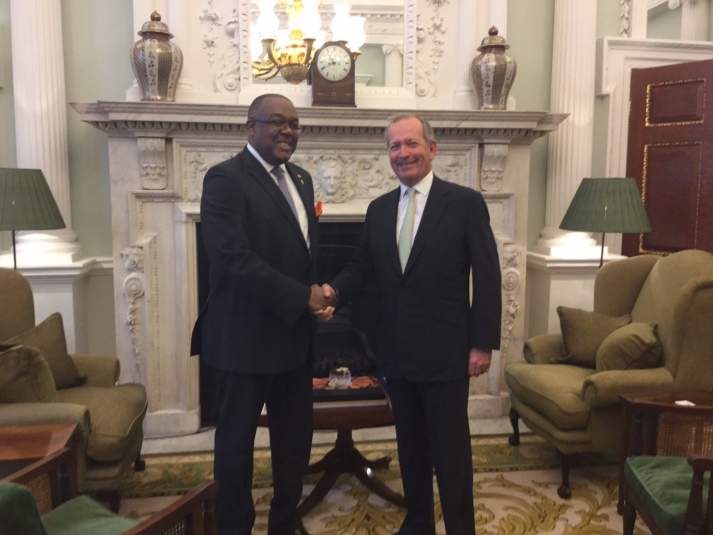 British Business executives will be in Ghana in the first week October to explore business opportunities.

The twenty member business team will have discussions with the Ghanaian government in the areas of energy and infrastructure under the government’s Public Private Partnership arrangement in Ghana and how the City of London could support its implementation.

The Lord Mayor of the City of London The Rt. Hon. Alderman Alan Yarrow, who announced this at a meeting with Ghana’s High Commissioner to the United Kingdom and Ireland Mr, Victor Smith also indicated that the business team from London will discuss opportunities in the capital markets, bonds, listings, ratings among others.

He announced that the team will arrived in Accra on the 1st of October and will be in the country for a week.

Rt. Hon. Alderman Alan Yarrow who will lead the delegation noted that they will engage Government officials on deepening commercial and bilateral relations and in the area of Tourism.

He intimated that the City of London, which is the world’s financial centre, has the expertise to assist the country in raising capital at competitive rates for Ghana’s infrastructural deficit.

Rt. Hon Alan Yarrow noted that his business desk has observed Ghana over the years and the results have been very encouraging as a destination for fruitful business particularly due to the peaceful atmosphere.

Mr Smith in his response expressed his gratitude to the Lord Mayor for their continuous confidence in Ghana and reiterated the commitment of Government in addressing the power shortages, currency depreciation, and fiscal discipline for economic growth and employment generation.

He pointed out that the recent approval by the IMF Board for the second disbursement of $116.6 million to the country after a positive first review conducted in June 2015 indicates that the Government’s economic stabilization programme is on track and a clear indication to the business community that the country is poised for doing business.

The High Commissioner pointed out that the visit of the Lord Mayor sends a positive signal to the investment community about Ghana as an investment destination of choice and also at the time that Mission’s investment drive is attracting potential investors into productive sectors of the economy.

He urged the City of London to take advantage of Ghana’s political stability, return on investment and a high degree of personal safety as well as rule of law to invest in the country.