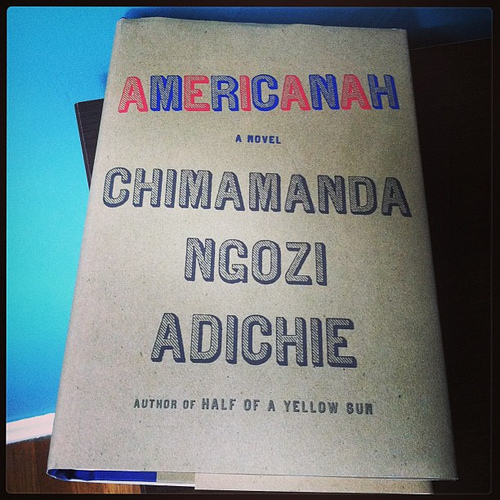 “So an African-American is a black person with long generational lines in the United States, most likely with slave ancestors. She might write poetry about “Mother Africa,” but she’s pleased to be from a country that gives international aid rather than from one that receives it. An American-African is an African newly emigrated to the United States. In her native country, she didn’t realize she was black — she fit that description only after she landed in America”.

The merging of critical discussions with rich and insightful observations on race, inequality and migration, makes Americanah an evocative read.

Americanah is the third novel from the author of half of a yellow sun and purple hibiscus – Chimamanda Ngozi Adichie. This is a novel set in Nigeria, America and Britain, telling the stories of Ifemelu and Obinze who start of as childhood sweethearts. At university, in a Nigeria where constant strikes threaten their education, they part ways.

Ifemelu’s experiences in America are detailed through initial difficulties during her college years in America, through to a confident, self-assured blogger on the issues of race, years later. Ifemelu has made a living writing a successful blog called; “Raceteenth or Various Observations About American Blacks (Those Formerly Known as Negroes) by a Non-American Black.”

Much of the story is based on Ifemelu’s reflections, (having made the decision to return to Nigeria) as she is braiding her hair in a black hair salon. She looks back on her time in America over fifteen years; during which she has witnessed Barack Obama become the president of America.

There are glimpses of Obinze’s life in Britain, where he has overstayed his visa and is eventually deported back to Nigeria. The lives of Ifemelu and Obinze portray with precision, modern migrants who are “raised well fed and watered but mired in dissatisfaction.” They aren’t fleeing war or starvation but “the oppressive lethargy of choicelessness.”

Back in Lagos, Obinze becomes a successful property developer and is married. However there is always a sense of Obinze feeling constrained and not content despite seeming to ‘have it all’.

Ifemelu describes a process of “becoming black” once arriving in America, something that she was not aware of when living in Nigeria. The modern cultural trend of rediscovering natural Afro hair, and discovering an online community of black women where “coily, kinky, nappy, woolly hair is normal” also forms a strand of Ifemelu’s identity and self-discovery.

In the final section of the book, Ifemelu has returned to Nigeria and is mockingly known as ‘Americanah’. Whilst she has made a conscious effort to maintain her Nigerian accent, Ifemelu observes that her tastes and aesthetics have changed, and makes insightful observations of the frustrations of a returnee, which would no doubt resonate with many.

Adichie has great skill in her observations of issues of social nuances, identity and race and is definitely not coy about causing a stir, which is demonstrated in excerpts of Ifemelu’s blog posts.

As a reader, one gets the sense that Adichie has drawn on many of her own experiences growing up in Nigeria, studying at Universities in America and living both in America and Nigeria as an adult.

Whilst there are points where it feels like there could be less inserts of the blog posts, Adichie manages to successfully pull together the various threads within the stories and draws in the reader as her passion on the topic shines throughout the novel.

Americanah illustrates Adichie’s flair in combining literary prose and weighty themes in society, and further cements her place as one of the most prominent African authors of our time.