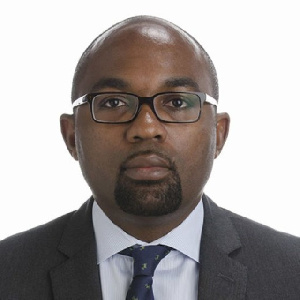 Almost 100% of Ghana’s tax revenue goes into the payment of salaries for civil and public servants as well as used for interest payments, the International Monetary Fund has said.

The Bretton Wood institution also insists the government of Ghana is over-borrowing while tax revenue is below expectations.

This, according to the IMF, is what has brought Ghana to the brink of becoming a highly debt-distressed country.

The implications of being a highly debt-distressed country include higher cost of credit and a lack of fiscal space to finance capital projects among others.

“It’s a common misconception to think that that fiscal space is revenue and how much revenue that you can raise; I think that is a first I want to put out there…. Revenue, obviously is so much important and I will come to that. Fiscal space is bigger than that. And, in fact, borrowing or the capacity the government has to borrow is also part of fiscal space.”

He added: “Borrowing for government is completely normal, overborrowing is what is an issue for a country in general.”

“By this measure of fiscal space, if you were thinking about tax revenue, there is no space to do anything about development. But when we look at the last few years, I think it’s fair to say that we have seen an increase in spending by the fact of you looking at the tax revenue, the fiscal space is quite narrow”, Dr Mama said.

He noted: “The question is: how was the government able to increase fiscal space despite the fact that it has a very narrow tax base. The key here, in my view, is that there is a virtuous cycle by which when you do the proper fiscal consolidation, when you have credit policies including the programme that we have with Ghana, you are able to craft some space to finance some spending.”

“Don’t get me wrong…right, as an IMF, we are unequivocal in the fact that the way to improve fiscal space in Ghana is about improving domestic revenue mobilisation and not borrowing, and, so, I want that to be our basis.”

Recently, the World Bank cautioned Ghana against excessive borrowing as the total debt stock of the country hit GHS214.9 billion.

“At the moment, Ghana is in the situation that World Bank describes as moderate-high risk of debt distress, so, of course, the country needs to be careful and the country is at the stage where things are critical. I am confident that the Finance Minister and his team are fully aware of that and some borrowing, which not totally a bad thing, but you have to borrow on the right terms”, the Country Director Frank Laporte said.

Interest payments on loans will cost the nation GHS22 billion this year. The nation is, however, targeting GHS67.07 billion as total revenue and grants for this year.