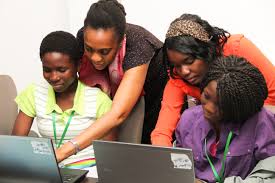 To push Africa’s digital transformation agenda, a new World Bank report estimates that the continent needs about US$100 billion – or close to US$9 billion a year – to connect an additional 1.1 billion people online by 2030, especially women and youth.

The Broadband for All report “A Digital Infrastructure Moonshot for Africa” is one of the first to quantify the cost of bridging the broadband gap in North and Sub-Saharan Africa. It seeks to ensure Africa’s universal access to the digital economy especially as it affects its youth demographic – more than 70% of Africans under 25 – and women who make up more than 50% of the population.

Making a case that the bold vision to ensure that most African individual, business, and government is digitally-enabled by 2030 is feasible, Benin’s Minister of Digital Economy and Communications says bringing the women and youth online, once and the right way, is key since they need it most.

“As we’re talking about broadband access for Africans, I usually say that those people that we’re talking about; those people that we want to connect, they’re not usually where we talk about those issues,” Aurelie Adam Soule said at the official launch of the report. “The women, the youth, we’re looking to connect today are not here actually. So how do we make sure as policy makers, as ministers, as international development funds, that their voices are heard even though they are not in the room?”

The case for connecting Africa through broadband is clear, the Director of the ITU Telecommunication Development Bureau, Doreen Bogdan-Martin, adds.

Despite excited that 83% of Africa has broadband plans, and there is 2G signal everywhere and 70% 3G, she says it is a concern that only 30% of Africans are online today considering that achieving several development goals including the 2063 agenda for Africa are dependent on broadband connectivity.

“We are plateauing. The bottom of the pyramid, those that need it most, that divide is increasing. That’s a concern,” Bogdan-Martin says. “In two weeks, we are launching our facts and figures. We’re going to see that the digital gender gap is growing significantly in Africa. Cause for alarm. We’re very concerned about that. We need to really shift, that’s why it’s so great we’re here today. We have a clear roadmap that this report has laid out for us. We need to shift our thinking. We need to be focusing on the demand side, the skills, we really need to focus on those skills. We need to break those silos and we need to view this report, as the report clearly says, as an opportunity to disrupt the trajectory.”

For Bluetown chief executive officer Peter Ib, connecting Africa online 100% by 2030 can be done from the perspective of his company which provides Wi-Fi solutions in rural areas though “it requires disruptive thinking on a number of areas.”

“On the technology side, we need to think differently; on the business side, this needs to be addressed in a different manner, especially on the government side and the regulation side, something else needs to happen that is not happening today,” Ib said, stressing the importance of the public and private sectors collaboration and funding to succeed.